For over 100 years, radiation therapy has been widely used to help reduce the recurrence of cancer and improve survival, and more than 1 million cancer patients in the U.S. receive radiation every year.However, despite a large body of research demonstrating that radiation therapy is an essential component of cancer treatment, many patients do not have access to this critical treatment. In fact, recent studies also show that many women opt out of receiving breast-sparing surgery with radiation therapy due to time, distance or difficulty accessing radiation therapy centers.Issues of patient access, combined with other external factors that are expected to have dramatic impact on the industry (such as reimbursement levels; potential isotope shortages; and recent Nuclear Regulatory Commission recommendations to evaluate alternatives to radiation sources, such as isotopes, that may pose a national security risk) have generated interest in alternative treatment delivery methods, such as Electronic Brachytherapy (eBx®). By eliminating the need for a high dose rate (HDR) afterloader device, heavy shielding, and regulations associated with radioisotope handling and disposal, the Xoft® Electronic Brachytherapy (eBx®) System® offers a flexible platform for administering radiation therapy. The mobile nature of the system, as well as the limited shielding requirements has helped spur interest in the device as a modality in the delivery of IORT.IORT delivers a concentrated beam of radiation to cancerous tumors during surgery. This technique allows doctors to administer high doses of radiation to tumors without exposing nearby healthy organs to radiation. A single dose of intraoperative radiation may have as much effect on the tumor as 10–20 daily radiation treatments.

Marianne H. of Illinois was the first patient to undergo Intraoperative Radiation Therapy (IORT) utilizing the Xoft System.The new treatment was performed under the direction of Dr. Olga Ivanov, Medical Director for Little Company of Mary's Comprehensive Breast Health Center and Dr. Adam Dickler, Radiation Oncologist at Little Company of Mary Hospital as part of a clinical trial at the hospital. ( To read the clinical case report published in the World Journal of Surgical Oncology, click here ).IORT delivers a concentrated beam of radiation to cancerous tumors while they are exposed during surgery. In Marianne's case, the treatment goal was to deliver a complete dose of radiation therapy in the operating room at the time of her lumpectomy. When she awoke, she not only had her tumor removed, but had also completed her entire course of radiation therapy, which could normally take up to seven weeks."The fact that my treatment was done before I even woke up is beyond words," says Marianne. "As Dr. Ivanov says, I came in with cancer, went to sleep and when I woke up I was completely done with my breast cancer."IORT is being evaluated for its potential to allow doctors to administer high doses of radiation to tumors without exposing nearby healthy organs to radiation. A single dose of intraoperative radiation may have as much effect on the tumor as 10–20 daily radiation treatments.Using a miniaturized X-ray source that can deliver localized and targeted radiation treatment, Electronic Brachytherapy is designed to minimize radiation exposure to surrounding healthy tissue and is the only IORT technology that enables physicians and treating professionals to remain in the operating room with the patient.Marianne had completed her full course of treatment by the time she awoke from her surgery and was able to attend a wedding just days later. "I danced at a wedding four days later to, of all songs, 'I Will Survive.' You've got to dance that dance. Since, I'm doing great and I feel fine.""I want more women to know about this. I just can't believe how lucky I was to have this type of procedure available to me in my community," she added. 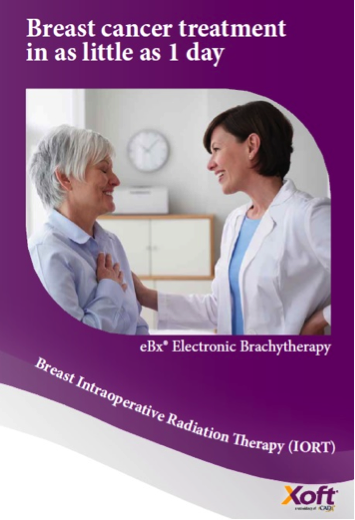